By Niall Murray, Irish Examiner
A Terence MacSwiney play was watched over the weekend by his grandson — almost 80 years after his own mother played a lead role in the last Cork production. 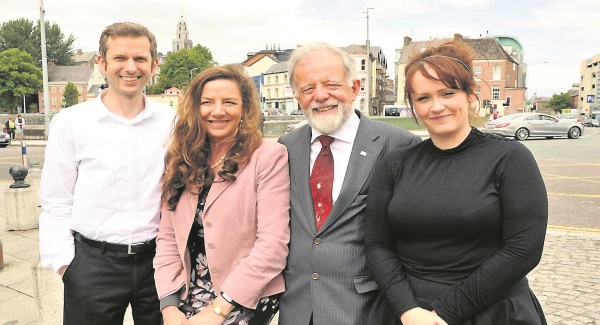 Professor Cathal MacSwiney Brugha, grandson of Terence MacSwiney, and his wife Catherine. Picture: Des Barry
The Revolutionist was published in 1914 by the dramatist and poet who was to become a TD, lord mayor of Cork, and revolutionary military leader. But it was not staged until a 1921 Abbey Theatre production just months after MacSwiney died on hunger strike in England. The five-act play was produced for three nights in 1937 at Cork’s Fr Mathew Hall by MacSwiney’s sister Annie, with his daughter Máire playing Nora, the subject of the hero’s affections. In what is believed to have been the first Irish performance since then, Máire’s son Cathal MacSwiney Brugha saw extracts from the play read by a local cast on the stage of Cork Opera House last Friday. In light of his later involvement in the Irish Volunteers and membership of the first Dáil after the 1918 election until his death in October 1920, the play is eerily autobiographical and prophetic. Mr MacSwiney Brugha said The Revolutionist was his grandfather’s use of art to show how to fight an unjust power and how subsequent independence could work.

“It turns out the main character Hugh O’Neill in the play dies, and Terence MacSwiney later dies himself. It’s an act of mysticism, where he is part of the art,” he said. The readings interspersed a day-long series of talks about MacSwiney’s cultural legacy, celebrating a lesser-known but very significant aspect of his life. Fiona Ní Bhriain outlined the anxiety about perfecting his craft that litters MacSwiney’s diaries from 1913 as he finished the play, a characteristic that dominated his literary and other work. The play is similar in name to William Orpen’s painting, The Revolutionary, which features in a continuing exhibition, ‘Conflicting Visions in a Turbulent Age 1900-1916’ in Cork’s Crawford Art Gallery, which organised Friday’s event. The painting was probably inspired by the Boer War, as Orpen finished it in 1902 when MacSwiney, then 23, was already heavily politicised.

Local historian Tom Spalding said he may have seen the procession of King Edward VII pass along the city’s South Mall on the way to the Cork International Exhibition on August 1, 1903. He preferred to leave the adulation for the king to those he described in a poem on the event as “flattering sycophants”. The groups that objected to the king visiting Cork included local branches of the Gaelic League, one of many organisations that brought MacSwiney and others with separatist ideals together in the decade before the 1916 Rising. UCC historian John Borgonovo said their involvement in Sinn Féin, the Celtic Literary Society, Inghindihe na hÉireann and other bodies prepared them for later leadership roles.

“That revolutionary generation worked hard trying to generate interest at a time when their beliefs were very much on the margins of Irish political life,” he said.

All that work paid off, he suggested, when the skills they learned and networks they made were put to use from 1916 onwards. “A person like Terence MacSwiney who was almost completely obscure, even in Cork, before 1914 was six years later probably the best- known Irishman in the world,” Mr Borgonovo said.

By not supporting the arts, the State is impoverishing imagination.
Next Story »

Holding down the fort with Corcadora