President Michael D Higgins addressed the annual commemoration of Michael Collins at Beal na mBlath in Co Cork, where the Irish revolutionary was killed in an ambush in 1922. 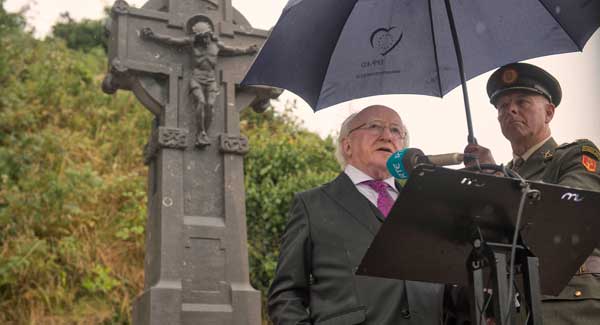 President Michael D Higgins addressed the annual commemoration of Michael Collins at Beal na mBlath in Co Cork, where the Irish revolutionary was killed in an ambush in 1922. President Higgins became the first sitting Head of State to deliver the oration. Mr Higgins said Mr Collins accepted that some form of partition was regarded as inevitable at the time for unionists “seeking a separate status in the north-east corner of the island”.

“With the benefit of hindsight, it has become easier, perhaps, to appreciate the merits of the path of compromise which Michael Collins, however reluctantly and heavy-heartedly, chose to follow,” he added. “Few today would challenge the wisdom of his conscious decision ‘not to coerce the North-East’. Yet, a century later historians differ as to the motivation of Michael Collins in relation to the assistance he sought to provide to forces in Northern Ireland in this period.”

In Dublin, Mr Varadkar spoke at a commemoration of Michael Collins and Arthur Griffiths, key figures in the fight for Irish independence, at Glasnevin cemetery in Dublin.

The comments came as Mr Varadkar also used his speech to urge his own Government to focus on building a social recovery as much as an economic recovery in the upcoming Budget.

At glasnevin cemetery for Griffith Collins commemoration and speech by @campaignforleo pic.twitter.com/6CDpYf7XoF

Get out and about for National Heritage Week
Next Story »